Vijapura Fort is an example of grandeur, strength, longevity and a symbol of pride for the Kannada community. Situated in the Vijapura City within the district of Vijapura, it is an indelible mark left behind by the Adil Shahi dynasty who ruled the Kannada region and parts of its surrounding areas for more than 200 years. They have inspired the almost all the historical monuments, art and culture and even the cuisine of the Vijapura region.

This district has a number of memorable historical monuments, among which the Vijapura Fort is the most popular and receives a huge number of tourists every year. The district of Vijapura is often referred to as the Agra of Southern India due to the prevalent excellence in the monuments that have been built by generations of the Adil Shahi rulers. This is what makes the history of the fort of Vijapura really interesting.

Established between the 10th -11th centuries by the Kalyani Chalukyas, Vijapura was known as Vijayapur, meaning the city of victory was conquered by the Khilji Sultanate of Delhi in the 13th century and renamed to Bijapur during the 20th century but was changed again recently.. Yusuf Adil Shah, who was the successor of the Adil Shahi dynasty, was enslaved by Mahmud Gavan, the then ruler of the kingdom of Vijapura. He was later appointed as the Governor of Vijapura during the year 1481 as the Sultan was quite pleased with his chivalry and bravery displayed while defending his state from the Khilji Sultanate. 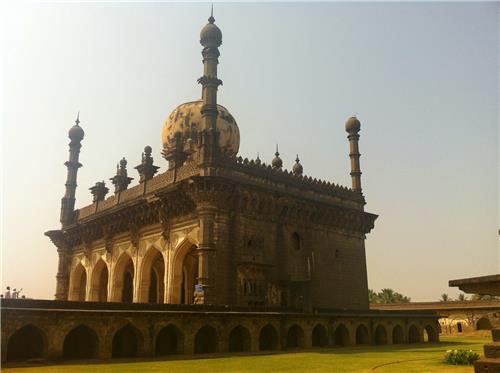 During Yusuf Adil Shah’s tenure as the governor of the Vijapura district, he laid base for the fort and the citadel with the help of skilled artisans and architects from Rome, Turkey and Persia.  He separated himself from the Sultanate of Delhi and declared the region of Vijapura independent from their reign which led to the establishment of the Adil Shahi Dynasty or the Bahamani Empire.

Yusuf Adil Shah was succeeded by Ibrahim Adil Shah, who had married a Hindu princess known as Punji and acquired certain parts of the Marathwada region. Although there was an attempt to take away the throne of the Adil Shahi dynasty’s first successor, as the King was a minor when the founder passed away. But it was protected and fought for by the brave and chivalrous mother of Ibrahim Adil Shah who ensured that only her son acceded the throne of the Vijapura Sultanate. He was the one who built the Jama Masjid within the fort, which was the place of worship for all the civilians.

Ali Adil Shah I, the successor of Ibrahim Adil Shah, made further additions to the kingdom of Vijapura by entering into pacts with other Muslim rulers, ruling in the Deccan region. He added the present cities of Ahmednagar and Bidar to the kingdom as well as built a number of structures within the fort as well as across the sub-urban area of the state. These structures include the Ali Rauza, which his own tomb, the Gagan Mahal and the Chand Bawdi-a large well meant for water supply.

The succession of Ali Adil Shah I records the story of one of the most valiant mothers in the history of India-Chand Bibi. Ali Adil Shah, had crowned his nephew Ibrahim Adil Shah II, who was also a minor at that time, as the successor to the throne as he did not have a son of his own. Chand Bibi was Ibrahim’s mother who protected him from all odds and treacherous activities until he turned 18 and was capable enough to manage the kingdom himself. He turned out to be a very intelligent and cool-headed king, who ensured that a cordial relationship was maintained not only between Siya and Sunni Muslims but also between Hindus and Muslims, within his kingdom.

His rule was one of the most peaceful reigns in the Vijapura region and he ruled for about 46 years, which entitled him to the respected title of ‘Jagatguru Badshah’. He built many Hindu temples as well as the famous Gol Gumbaz which is the second largest dome in the world consisting of whispering galleries. He also established one of the largest guns in the country, known as the Mallik-E-Maidan, within the fort. It is a huge gun of about 14.6 feet positioned at the terrace of the fort and is visible even today from a huge distance as well as preserved in the best condition. 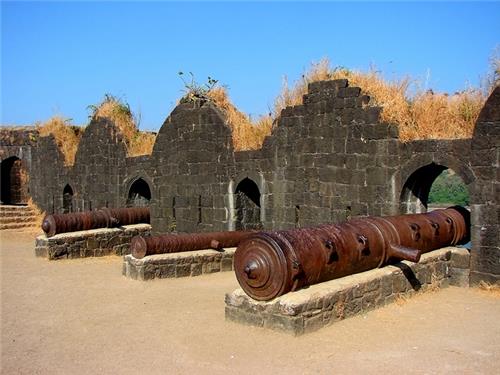 Post the rule of Ali Adil Shah I, there were barely any effective rulers, since there a lot of internal issues related to the succession of the throne, leading to the weakness of the kingdom and lack of coordination and cooperation. This resulted in the kingdom passing on into the hands of the brave Maratha ruler Shivaji, who had killed Afzal Khan, heading an army of 10,000 men.

But soon after the death of Shivaji, the kingdom was conquered by the last influential and heartless Mughal ruler-Aurangzeb, in 1686 and this brought about the end of the 200 year siege of the Adil Shahi Dynasty with the death of Sikander Adil Shah, the last Adil Shahi ruler.

The worst was seen by the state, during the 19th century when it was hit by a famine as its buildings were in ruins due to scarcity of water and food. The city had become a desert and declared a dead city which were partially revived and renovated based on the historical records.

The Structure of the Vijapura Fort

The area around the Vijapura Fort is surrounded by mosques, palaces, gardens and tombs constructed by different rulers from the Adil Shahi dynasty. The forts as well as all the other buildings built by the Adil Shahi rulers reflect the elegance and beauty of the Persian and Ottoman Turkish architecture. The Vijapura also has many ruins of ancient temples, dating back before the Adil Shahi rule.

The circumference of the fort’s outer wall measured around 10 kilometers to ensure maximum protection for the citadel. It is one of the largest and strongest, most well-protected fort in the India with around ninety-six large bastions constructed in various designs. There are about ten more bastions situated at the 5 different arched-decorated gateways of the fort.

To further strengthen the fort, a moat which was 50 feet wide and about 10 feet in addition to the already about 50 feet high and 25 feet wide wall. A certain section of the wall consisted the battlement curtained wall which is around 10 feet high and assisted the soldiers in locating the approaching enemies or attackers enabling them to fight back.

During the best days of the reign of , when the Adil Shahi Dynasty was at its prime an covered almost the whole of the Deccan Plateau, the Vijapur Fort was their most prized possession and construction. It was secured with almost 1000 brass and iron canons, the palace within the fort was encircled by 2 more moats and was also guarded by almost 2000 men, while the city was protected by Nanmouth Chan, an Italian who headed a garrison of around 5000 men quite efficiently and earnestly.

The fort was in itself a country at that point of time and laid the foundation for the culture of the current state of Karnataka and certain parts in Maharashtra close to the Kannada border.