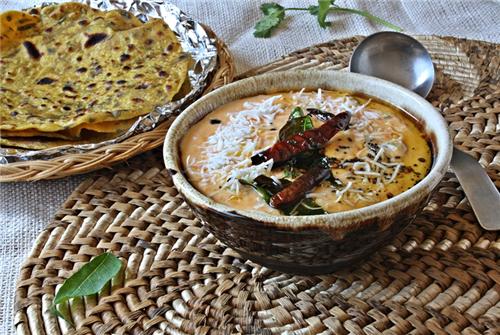 Mosaru Bajji
The cuisine of Bijapur is one of the diverse cuisines in India. Restaurants in Bijapur serve dishes from south Karnataka, north Karnataka, and north Indian states. Various vegetarian and non vegetarian dishes are included in the Bijapur cuisine. Dining out in the Bijapur restaurants would be an unavoidable part of a trip to Bijapur. Eating from traditional restaurants and street restaurants in Bijapur, where authentic Karnataka dishes are prepared attractively would be a unique experience, providing better understanding about the life style and cuisine of the Bijapur location.

The North Karnataka food, which is becoming a demanded brand of food stuffs in the south sides of Karnataka and North Karnataka is the special of Bijapur cuisine. The cuisine is similar to the cuisines in some other locations in north side of Karnataka like Dharwad, Hubli, Gulbarga, Belgaum, Bidar, Yadgir, Bagalkot, Raichur, Davangere, Gadag, Haveri, Koppal and some areas in Bellary.

Rice is the primary items served in a north Karnataka vegetarian meal other items are:

Festivals and Food in Bijapur

Alike in all other areas in the north Karnataka, special food recipes are prepared during the occasions of festivals in Bijapur. The details of some of such festivals and corresponding dishes prepared in Bijapur are listed below:

Comments / Discussion Board - Food in Bijapur