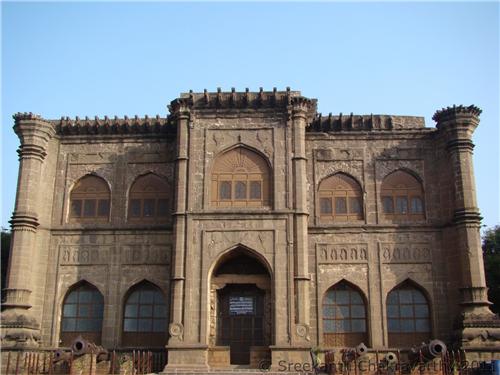 Gagan Mahal is one of the eminent palaces in the Bijapur city. The palace can be considered as one of the oldest land marks seen in the city of Bijapur and its construction was completed in the year of 1561. This palace was believed to be named by Ali Adil Shah I, the fifth ruler of Adil Shahi dynasty as Gagan Mahal, which means heavenly palace. This palace is believed to be the first ever huge sized royal residency built by the Adil Shahi dynasty. During the time of Ali Adil Shah I and his successors, the place was used as a royal residency as well as the durbar hall of Bijapur, where important meetings were conducted.

The palace is one of the present tourist attractions of Bijapur. A visit to the Gagan Mahal is a “must do” thing while Bijapur trip. Gagan Mahal is located near to the citadel of Bijapur built by Adil Shahis for the protection of city from enemies. Alike in all other palaces of Adil Shahi dynasty beautiful carvings and architectural attractions are visible in the Gagan Mahal also. Gagan Mahal is one of the protected heritage monuments in Bijapur and served as the center of administration of ancient Bijapur city for a period of time in the 16th and 17th centuries.

Beautiful Indo Islamic method of architecture was used for the construction of Gagan Mahal in Bijapur. The structure was the tallest structure in Bijapur, when it was constructed. Gagan Mahal has two floors. The ground floor of Gagan Mahal was the place for the audience hall or durbar hall. Royal ceremonies and meetings were conducted here during the Adil Shahi regime in Bijapur. The second floor of Gagan Mahal was used as residency for the royal family. The central arch seen on the façade of the Gagan Mahal is one of the tallest arches in the entire Bijapur city and it is surrounded by two arches with size smaller than the middle one. These smaller arches guide people to the upper storey of the Gagan Mahal.

However most of the parts of Gagan Mahal including the upper and lower floors are in ruins today. The façade of the building with three major arches is the one and only part of Gagan Mahal which is still standing without much damage. The central arch of the façade has a height of 66 ft (20 meters). According to the historical records, Sikandar Adil Shah, last ruler of Adil Shahi dynasty, surrendered to Aurangzeb in the Gagan Mahal of Bijapur.