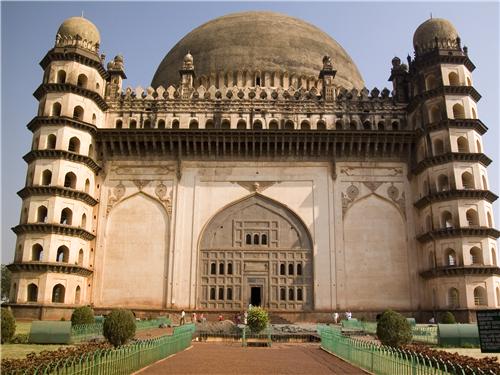 Gol Gumbaz, the Taj Mahal of south India, located in Bijapur is the most popular heritage structure in the Bijapur district in north Karnataka. The structure is the most famous landmark of the Bijapur city and it was built by the Adil Shahi dynasty as the tomb of the Adil Shahi ruler Mohammed Adil Shah. The tomb is designed in a typical Adil Shaihi architecture by the famous architect of that time, Yaqut of Dabul. The construction of this huge structure was completed in the year of AD 1656. This Indo-Islamic architectural wonder is famous about its dimensions and carvings. Along with the tomb of Muhammad Adil Shah, the seventh ruler of Adil Shahi dynasty, tombs of his wives and daughters are also located within the Gol Gumbaz in Bijapur.

Yaqut of Dabul was the architect of this huge and wonderful structure. The Indo-Islamic style of architecture was used for the construction of the Gol Gumbaz. A huge cube shaped structure of 47.5 meters (156 ft) length on each side is the major part of the structure. The dome of the structure, one of the largest domes ever built in the history has an outer diameter of 144 feet.

There are eight intersecting arches in Gol Gumbaz to provide strong support to the huge dome of Gol Gumbaz. At each corner of the main cube like structure of Gol Gumbaz, octagonal cross sectioned towers are provided with dome on the top of each. These towers have seven floors and a staircase within it to reach the terrace of Gol Gumbaz.  Top most floors of every tower open to a round gallery which surrounds the dome.

Inside Gol Gumbaz, a square shaped podium can be seen. It has steps on every side. At the middle of this podium the cenotaph of Muhammad Adil Shah is located. The exact position of Muhammad Adil Shah’s grave is decorated with a canopy made of wood on the podium. The foundation of Gol Gumbaz has been fixed on bedrock, which gives strong support to this huge structure built before centuries.

The cube like structure built on the basement of Gol Gumbaz has side walls decorated with three arches on each of them. Among the three arches, the central one dominates in size than other two. All these walls have doorways on it, except the one which located at the north side. At the north side a semi–octagonal chamber can be seen associated to the wall. The total area consumed by the mausoleum is calculated to be 1,700 meter square and it is one of the biggest structures built in India during the medieval times.

The dome of the Gol Gumbaz, for what the structure is famous all over the world has 37.92 meters of internal diameter and a thickness varying from 2.74 m to 3.05 m.  There is an amazing Whispering Gallery in Gol Gumbaz. This gallery is situated at a height of 33.22 m from the floor of Gol Gumbaz. The place is called so, because even the sounds produced in low strengths from one end can be heard from the other end of the gallery. Sounds are echoed in this region for more than ten times. The area is one of the wonderful parts of Gol Gumbaz architecture.

How to Reach Gol Gumbaz

Gol Gumbaz is situated at the heart of the Bijapur city, within the ancient citadel of Bijapur. The city of Bijapur, located about 600 kilometers distant from the state capital Bangalore, is well accessible by train from the famous cities in the Karnataka state like Hubli, Badami, Sholapur and Bangalore. Badami, Belgaum, Bidar, Hospet, Hubli, and Bangalore locations in Karnataka are connected with Bijapur with daily service of private and government owned buses. After the opening of Bijapur air port, which is under construction, it would be possible to reach the location by flight from popular air ports in the country.