The Bijapur city is located at north end of the south Indian state Karnataka. Bijapur city, the capital of present Bijapur district has a rich culture. The ruins of this culture are still present in the city. Since the starting of the 11th century the region of Bijapur was under the control of the Chalukya Empire and the location was called in the name Vijayapura by the people in the region.

During the final stages of 15th century, when Adil Shah Dynasty conquered the area, it started to be known as Bijapur and Yusuf Adil Shah, the founder of the Adil Shah Dynasty turned Bijapur into an independent city as well as the capital of their dynasty. Most of the heritage buildings and monuments seen today in this city were built during the rule of Adil Shah Dynasty in Bijapur. 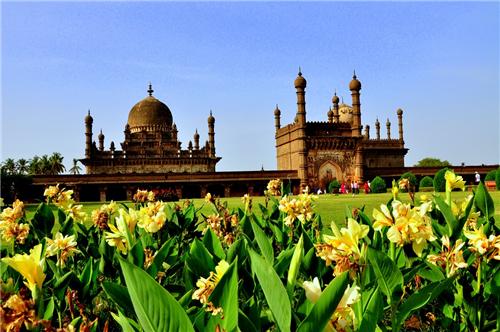 Ibrahim Roja
The Adil Shah dynasty is a famous dynasty ruled the Bijapur sultanate in the Deccan region from AD1490 to AD 1686. Bijapur city was under the control of the Bahmani Sultanate during the 15th century. When the Bahmani Sultanate was separated into five splinter states in the 15th century, the Adil Shahi Dynasty one of the five splinter states of the Bahmani Sultanate got the control of the Bijapur city. Yusuf Adil Shah (1490–1510) was the first ruler of the Adil Shahi dynasty. Yusuf and his heirs used the title Adil Khan with their name. The meaning of the word ‘Khan’ is 'Chief' in Mongolian language and 'adopted' in Persian language.

By the time of Ibrahim Adil Shah I (1534 – 1558), the grandson of Yusuf Adil Shah, the title Adil Shah Dynasty started to be used commonly. Except the northern side, every boundaries of the dynasty was expanding throughout the history of Adil Shah. The victory of Bijapur over the Vijayanagar Empire in the Battle of Talikota, in AD 1565 was a milestone in the history of the dynasty and there after the boundaries of the kingdom was started to expand more easily. During the 17th century Mughals started to impose their suzerainty on Adil Shah and this rule ended in Bijapur in the year of 1686, when Mughals conquered the city.

The Bijapur city stayed under the control of Mughals from the end of Adil Shahi Dynasty. In AD 1724 Hyderabad Nizam gained the control of the Bijapur city. He remained in charge of the city till AD 1760. In AD 1760, Hyderabad Nizam was defeated by the Marathas and Marathas added the city of Bijapur to the Maratha Peshwa. From 1760 to 1818 Marathas managed the control of Bijapur. In the year of 1818 Marathas suffered a defeat from the British in the third Anglo-Maratha War. After the third Anglo-Maratha War, British ensured their suzerainty over the city of Bijapur and most of the prominent cities in India. The British east India Company assigned the power over Bijapur city to the princely state Satara. Then the city remained under state Satara till the year of 1848.

The princely state Satara along with Bijapur, one of the territories of Satara was joined to the Bombay Presidency of Britain after the last ruler of the Satara state passed away without a male inheritor. Later, the British formed a new district in the Deccan region called Kaladagi, which included the present Bagalkot and Bijapur districts in the state of Karnataka. In the year of 1885 the city of Bijapur was chosen as the headquarters of the newly formed Kaladagi district, in British India. When the British left India, the Bijapur city was merged with the formal Bombay state.

When India became independent, the city of Bijapur, was the head quarters of the Kaladagi district formed by the British, was added to the Bombay state. Then the city was assigned to the Mysore state, in independent India. In the year of 1956, when the south Indian state of Karnataka was formed by joining the areas in India speaking Kannada language, the city of Bijapur was added to Karnataka. Again in 1997, few of the southern Taluks in Bijapur district was separated from the district and formed a new district named Bagalkot. Today the city of Bijapur is the head quarters of the Bijapur district situated in the north Karnataka. The city is considered as one of the heritage cities in India and hosts so many monuments constructed in the past history of Bijapur.

Comments / Discussion Board - History of Bijapur