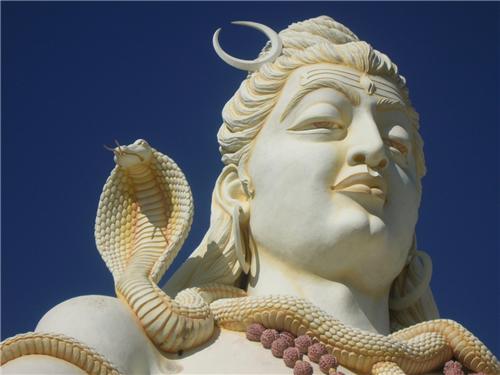 The Lord Shiva statue in Bijapur is the second largest statue of lord Shiva in the world. This 85 feet height statue has been installed by the T K Pattil Banakatti Charitable Trust in Bijapur. This 1500 tones statue was prepared by the sculptures from Shimoga for about 13 months and the civilian design was supplied by the Bangalore based architects.

A small Idol of Lord Shiva has been installed near this statue and the wall inside the temple describes the mythological stories about Lord Shiva. Shivagiri is gradually developing as a pilgrimage place attracting devotees during Mahashirathri and other special occasions. People visit this temple on Mahashivarathri to offer Special Pooja and every year the trust organize a variety of cultural programs and Rudrabhisheka would be performed to Sri Kashi Viswanatha. The idol has designed in a manner that when it gets the sunlight it will appear like sparkling. Originally the statue of Lord Shiva had four arms and was adorned in golden paint.

The small idol was created in less than a year by four artists in Shimoga. Even very small things have been taken care during this idol creation like the third eye, Rudrakshimala, snake, moon, Trishul and the Dmarugha. There are many other attractions for children like sliders, merry go round and beautiful garden around this statue.

The big statue of lord Shiva is a very recent construction, but the town and the shrine in this place are very ancient and there is an interesting story behind this temple. The king Ravana of Lanka was a great Shiva Bhaktha and He wanted to gain more power and immorality by gaining the possession of Athmalinga. Athmalinga is a linga with mystical powers. Ravana started a penance to lord Shiva and the divine sage Narada realized the havoc of Ravana and appeals to Lord Vishnu, who tricks Ravana to ask Devi Parvathy instead of Atmalinga. The king Ravana soon realized his mistake and he has done one more penance to lord Shiva, then the lord Shiva appears and he got the Athmalinga. But Lord Shiva gives Athmalinga with a condition that he should not place the Linga on ground and Ravana agrees Maheshwara's condition.

One can find many shops selling pooja items, snacks and soft drinks at the premises of this wonderful statue. This huge towering statue of lord Shiva is visible from long distance. This temple is located on the peninsula and the three sides of this temple is bounded by the shimmering sea and rolling hills and this place is considered as the most favorite picnic spot in Bijapur. This temple presents the scenic view with the Arabian Sea and the coconut areca groves nearby. There is two full sized solid elephant of concrete guarding in the steps of this temple.