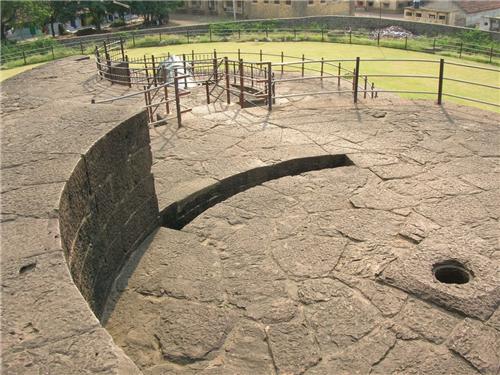 Malik-e Maidan in Bijapur is one of the well known monuments in this heritage city. It is a huge cannon placed on the top of a tower in Bijapur. Malik-e-Maidan can be translated as “monarch of the plains” to English. The structure was erected by the famous Bijapur ruler, Ibrahim Adil Shah II during the 16th century. The cannon is famous as the largest cannon used in India during the medieval times. The structure is also popular in the region with the name Burj-E-Sherz, which is the name of the tower on which the cannon has been placed. Burj-E-Sherz means the tower of lion in local languages and the structure acted as testimony of the glory of Adil Shashi dynasty during their regime in Bijapur. The monument is one of the best ten historical monuments of the Bijapur and travelers to Bijapur will never want to miss this place on their trip.

Ibrahim Adil Shah II erected this monument to commemorate the victory of Adil Shahis in the Battle of Talikota, in 1565. In the famous Battle of Talikota, Adil Shahis defeated Vijayangar Empire and ensured their monopoly on south sides of Bijapur. The monument of Malik-e Maidan is visible within the citadel of Bijapur, on the west side between two bastions. The dimensions of the cannon in Malik-e Maidan would be wondering everyone visiting the spot. The huge cannon of Malik-e Maidan  has a length of 14.6 ft (4.45 meters), which was considered as extra ordinary during the medieval times. The outer diameter of the cannon is 4.9 ft (1.5 meters). The bore of these cannon is calculated to be 28 inches. All these features along with 55 ton weight of the cannon make it one of the biggest guns used during the time of Bijapur sultanate.  The gun has beautiful carvings on it. The lion’s head carved on the tip of the gun is an example of the talent of sculptors, who implemented delicate carvings on it. The muzzle of the cannon resembles a roaring lion and carving of an elephant is also visible in the mouth of the roaring lion.

The metal of the cannon remains cool even on hot seasons, in Bijapur and the people in the city also had a belief that, touching these cannon can bring good luck to them. The material used for the construction of Malik-e Maidan cannon is an alloy of copper, iron and tin. It makes bell like sounds while tapping on it slightly and the outer side of the cannon is appeared in dark green color. It is being believed that the British had a plan to take the cannon to England. The heavy weight and large dimensions of these cannon are considered as the reason, why they left the plan. There are some inscriptions on these cannon and according to these inscriptions the cannon was cast in Ahmadnagar in the year of 1549. The name scripted on the cannon, Muhammad-bin-Hasan Rumi, is believed to be the builder of the cannon.  Another inscription on the cannon is about the conquering of Bijapur by Aurangzeb, in 1686. People in the locality believe that this huge gun was placed at the top of the tower, Burj-E-Sherz by using 10 elephants, 400 oxen and efforts of hundreds of people in Bijapur.

The best time to visit this monument can said to be the months of September to March, which is the best season of tourism in Bijapur. During the time, a moderate climate is observed in this area. The location is open to the visitors every day of the year, except on public holidays. People are allowed to enter the site from 10 in the morning to 6 in the evening.