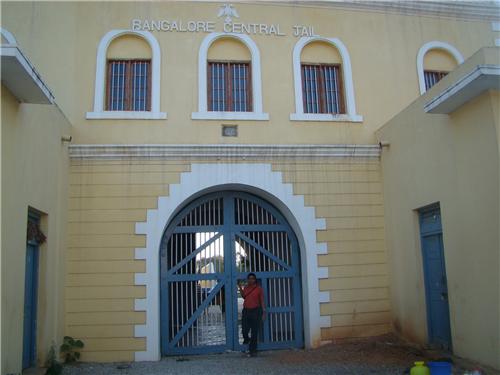 Bijapur district central jail is one of the oldest prisons in Karnataka. It is located on the outskirts of the city and this ancient building belongs to the Adil Shahi era. The Bijapur central jail was built by the Nawab Mustafa Khan, a courtier to Mohammad Adil Shah in 1640 only for the king’s guests. It was later turned into a prison in 1885 by the British government. The prison has a lofty Persian-styled entrance, with wide walls in black and Arabic scriptures carved on them. Unlike other historical monuments, it is not open for the public.

This building has a number of small ancient structures in the form of tomb and mosque and there is a mosque inside the prison too. This mosque is opened for visitors during Ramadan. This prison stands out as one the most protected prison having an enclosure with two high, thick walls built around it. This building does not show any signs of renovations and the roof of this structure is very pitiful. The staffs working there often complained of water leakages during rainy season.

The staff quarters is now situated on the premises were once used as horse stables. The Bijapur Prison was meant to house only 290 men and 25 women. There is a demand for a bigger and contemporary style new jail. But the jail authorities say that the building could not be expanded because of its architectural design. Each barracks in this jail has a small arched-shaped room which is less than six ft tall and it does not have clear visibility, therefore it is impossible to install CCTV cameras.

Modernization of Prisons in Bijapur

India Government introduced a new scheme to be implemented over a period of five years (2002 to 2007) to modernize the prisons in India with an outlay of 1800 crores on cost and the major works that are sanctioned for implementation under this scheme include construction of 11 new jails, repairs, renovations and expansions at 28 jails, improvements in water supply and sanitation at 12 jails, and construction of 456 staff quarters taken up at 23 various locations. As part of the modernization of the prisons in the country, the Bijapur central jail got the integrated services digital network facility with the activation of the video conferencing facility with courts and other central jails.

Explore more about Administration in Bijapur

Comments / Discussion Board - Prisons in Bijapur