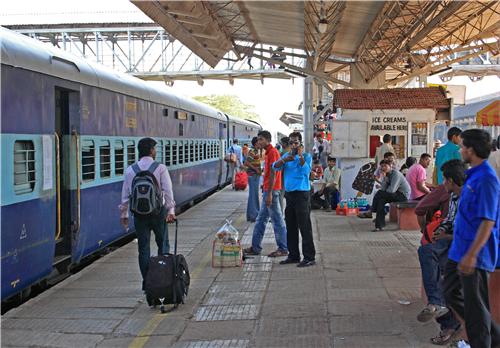 Being one of the most popular cities in Karnataka, Bijapur is well connected to Hotgi junction by a broad gauge rail line near Solapur and Kurduvadi on central railway towards the north and to Bagalkot and Gadag junction on south western railway towards the south. Bijapur district is connected with direct trains to Sholapur, Yeshwantpur (Bengaluru), Hubli, Shirdi, Mumbai, and Hyderabad.

Bijapur railway station is located just 2 km from the main town. The 1,000 mm wide meter gauge Gadag-Hotgi section was opened in the year 1884 and the Hotgi-Sholapur section in the year 1887 by the Southern Mahratta railway. In the year 2008 the line was converted to 1,676 mm wide broad gauge. This railway station belongs to the administrative control of Hubli division of south central railway.

The passengers can reach Bijapur by the route connecting Solapur in Maharashtra and Hubli crosses through the center of the district. Bijapur can be easily reached from Hyderabad, Bangalore and Mumbai via Solapur and if coming from Hospet, the route crosses through Gadag.

Karnataka state government had proposed eleven new railway projects in the state and Bijapur-Shahabad new line project was one of these proposed new lines to be constructed on a public-private partnership basis. The railway board had proposed to undertake this project along with other projects on PPP mode in 2010-2011. As the project was meant to initiate and expedite development of the area, the Karnataka government offered to provide the land required for the projects free of cost apart from partial funding.

Explore more about Transportation in Bijapur

Comments / Discussion Board - Railways in Bijapur