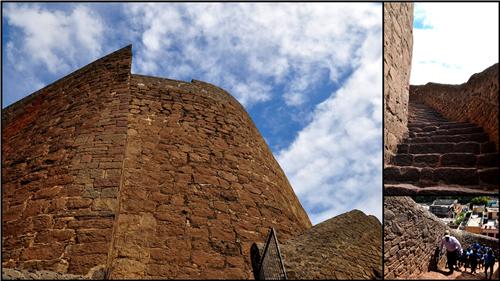 Saat Kabar is a popular monument in Bijapur famous in the name ‘the dark tourist spot of Bijapur’. Monuments in Bijapur are mainly the ruins expressing the glory of the dynasties who ruled the city in the past centuries. But sometimes, some monuments will remind people about the mad and cruel behavior of some ancient rulers. The Saat Kabar in Bijapur is also one of such monuments. The name of the place Saat Kabar means 60 graves, and the location, which is in ruins today hosts graves of 60 ladies.


History of Saat Kabar in Bijapur

Saat Kabar witnessed brutal and wicked murder of 60 ladies during the time of Ali Adil Shah II. During this time, the Bijapur Empire was becoming weak by the attacks from Mughals and Maratha emperor. In the year of 1659, Ali Adil Shah II engaged the duty of confronting great warrior of Maratha emperor Shivaji to the army chief of Bijapur, Afzal Khan. Afzal Khan was a brave army chief and he had leaded the Bijapur army to victory in several battles. He was also a strong believer of astrology. Afzal Khan used to meet his favorite astrologer before going to the battle field every time. Afzal Khan met his favorite astrologer during the preparations to confront the Maratha army at Pratapgarh. The astrologers told Afzal Khan about his lose and death in the war against Shivaji.

Afzal Khan became worried about the prophecies of the astrologers. He didn’t want his 64 wives, who were residing at his harem to be remarried to other persons. So he decided to kill them before confronting Shivaji. Afzal Khan took all his 64 wives to Navraspur, a place located five kilometers away from Bijapur city. There was a deep well in Navraspur and he drowned his wives one by one to the well. Then near to the well, he built graves for all these ladies, which started to be called in the name Saat kabar, after this brutal incident. People believe that one grave in the Saat kabar is empty since one of the wives of Afzal Khan ran away during this incident.

However Afzal Khan was killed by Shivaji, while confronting the Maratha army at Pratapgarh in 1659, November 10th.  The graves in Saat kabar and surroundings do not have any architectural attractions and it is completely different from all other heritage monuments in the city of Bijapur. But travelers visiting the city of Bijapur, come to this place because of the gruesome story and mysteries behind the Saat kabar.