Home city guide things to do in bijapur

Things to do in Bijapur 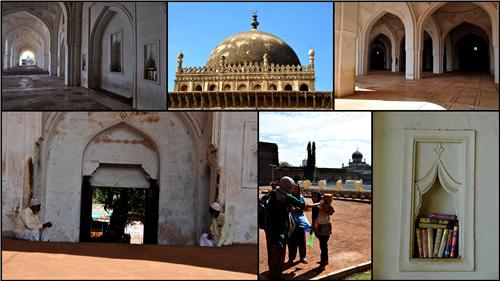 Bijapur, the Agra of south India is known for its finest specimens of the architectural splendor of Mugal dynasty. Bijapur was ruled by the Adil Shahi rulers between the 15th and 17th century. All the historical monuments in Bijapur were built by During Adil Shah’s dynasty. Things to do in Bijapur include a lot of things like sightseeing, shopping and enjoy some traditional food items in Bijapur. If someone want to experience the cave exploration and wild life safaris they can go for small trips to the nearby places in Bijapur.

Don't miss the chance to visit the historical places in Bijapur

Gol Gumbaz is the most famous historical monument in Bijapur District. It is the tomb of the former ruler Mohammed Adil Shah and is the largest tomb ever built. Ibrahim roza is the tomb of Ibrahim Adil Shah II Built by an Iranian Architect. Ibrahim Adil Shah II was the fifth king of the dynasty and known for religious tolerance like the Mughal emperor Akbar. Malik-e-Maidan, the monarch of plains is the largest medevial metal bell gun in the world. This 4 m long, 1.5 diameter and 55 tons cannon was brought from Ahamadnagar as a trophy of war by 400 oxen, 10 elephants and tens of men.

Gagan mahal means sky palace and it is built with a 21 meter facade and four wooden massive pillars. Gagan mahal has a majestic central arch. Upli Buruj is a 24 metre high tower standing to the north of Dakhani Idgah in Bijapur.  Chand Bawdi is a tank near Eastern boundary of Bijapur, which was built by the Ali Adil Shah. After the fall of the Vijayanagr Empire, a lot of people came to Bijapur and new settlement came up within the city raising the need for better infrastructure and providing water supply.

Asar Mahal used as a hall of justice were built by Mohammed Adil shah in the year of 1646. This was also used to house hairs from the prophet’s beard. Barakaman previously known as Ali roza is a mausoleum of Ali Roza Built in the year 1672. Shah Nawab khan was changed its name as barakaman as this was the 12th monument during this reign.

Must Visit Religious Spots in Bijapur

Shanmukhasvami Matha temple founded by the Saint Shanmukhswami is located near the Gol Gumbaz. Narasimha Temple is a highly worshiped temple situated on the west centre of the citadel and it is on the most under a papal tree. Torvi Narasimha Temple is one of the most popular temples in Bijapur, which is built underground and it is very close to Adil Shahi's Sangeeth mahal.

The very famous statue of Lord Shiva in Bijapur is considered as the second biggest statue of Lord Shiva in India. Basavan Bagewadi is the birth place of Lord Basavnna. There is a beautiful Nandi temple constructed in 11th century. Gajanana Temple was built by the ruler of Adil Shahi Dynasty in the year 1561. Prasanna Ganesh temple in Bijapur is well Known for its beautiful carvings.

Jami Masjid, the largest and oldest mosque in the Deccan built by Ali Adil Shah I fter his triumphant victory over Vijayanagara. Malika Jahan Begam’s Mosque built by Ibrahim Adil Sha II in honor of his wife Mallika Jahan Begam and It is stands about 100 yards west of the citadel.

Archaeological Museum in Bijapur is the only one of its kind

The Archaeological museum in Bijapur near the great Gol Gumbaz has several curious objects like inscriptions, sculptures, paintings, manuscripts, and weapons. This museum is run by the Archaeological Survey of India.

Cherish the moments at the tourist places near Bijapur

Badami is most popular for its sandstone cave temples and is made of red sand stones. Ailhole, the historically significant city near Bijapur has a number of temples and caves which are worth admiring. Pattadakal is another tourist place near Bijapur, it is about 134 Kms from Bijapur and has a number of Temples built in between 7th and 8th century. Kumatagi is one of the pleasure resort of Adil Shahi rulers, lies on the banks of a large reservoir.

The Kittur Rani Chennamma Theatre in Bijapur still stages dramas by professionals. Now a day drama companies are closing down due to the decrease of patronage in this field. An experimental theatre troupe known as Ninasam started by K. V. Subbanna, visited Bijapur and show cased their art during the Ninasam "Tirugata" means wandering in Kannada.

During Makar Sankranti an annual fare is organized in Shri Shiddeshwar Temple situated at the heart of the city. This temple is a holy place for Hindus and also a very beautiful tourist place to visit. The fare during Makar Sankranti is known for the cattle market organized outside the city limits. Farmers from the nearby villages and states come to trade in cattle. During these days the evenings are more beautiful with the firework held in this place.

It is one of the most popular festivals in Bijapur organized by the government of Karnataka every year.  Many talented artists and musicians can be witnessed in the event for the entertainment, attracting a large number of people to this Music festival. Other festivals in Bjiapur include Siddeshwara Temple Car Festival in January, Holi in March and Diwali In October-November.

Do Some Shopping in Bijapur

It is the traditional jewellery crafted by the tribe of Karnataka. They use copper, white metal and silver for making these traditional ornaments. The unique tope teni technique for making the ilkal sari is not found anywhere else in the country. Other craft products include rosewood sculptures, coin jewellery, silk carry bags, fancy antique metal armlets and embroidered waist line belts.

People from all over the world come to Bijapur and enjoy the traditional and mouthwatering dishes from here. Non-vegetarian dishes mainly Mughlai and Hyderabadi Dishes are served in most of the restaurants in Bijapur. The restaurants in Bijapur offers a wide variety of food items from different part of the world, right from Arab, Italy, China, or from the different state in India like Gujarat, Punjab, Rajasthan and Lebanon. One can experience the traditional taste of Bijapur from the roadside dhabas or restaurants. This roadside dhabas or restaurants serve equally tempting and mouthwatering dishes.

The visitors can get to eat yummy sweets like the Gajar ka halwa, moong dal halwa, Gulab Jamun, Jalebi, Malpua and even the Sohan Halwa. Any other food items in the country beat the traditional Chole Bhature, and Puri aloo in Bijapur. Butter chicken is one of the most famous dishes in Bijapur and is well known all over the world for its thick and creamy flavor of chicken.

Traveling Around in Bijapur

The main bus stand in Bijapur is near the southwestern side of the citadel. KSRTC and private operators ply buses to Bijapur. Bijapur is well connected by rails to major cities in India and it has own railhead located just 2 kms from the main town. Bijapur does not have its own airport and the nearest airport is Belgaum. It is about 205 kms from Bijapur. Indian and Jet airways flight operators connect Bijapur to the rest of India.

Comments / Discussion Board - Things to do in Bijapur