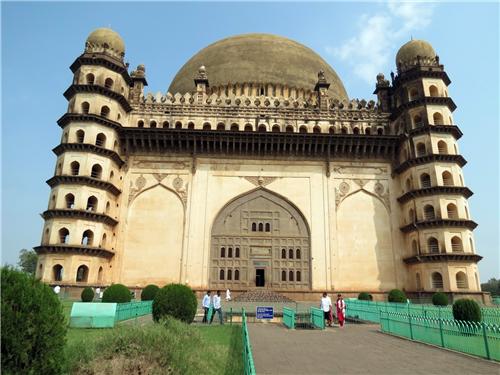 Bijapur a district in the north of the Karnataka state is a popular tourist location in the country. The factors attract tourists to this district include many historical monuments, places of religious importance and some tourist spots. The Bijapur city, the head quarters of the Bijapur district can also be considered as the main center of tourism in Bijapur. The Gol Gumbaz, Ibrahim Rauza, and Asar Mahal are some of the major tourist attractions as well as historical monuments located within the ancient citadel of the Adil Shahi dynasty in Bijapur city. Some of the major tourist spots in Bijapur are mentioned below:

The Gol Gumbaz in Bijapur can be considered as the most popular historical monument as well as tourist attraction in the city. Gol Gumbaz is the tomb of the famous Adil Shahi ruler Mohammed Adil Shah and it was built in the 17th century. One of the largest domes ever constructed in the world, the dome of Gol Gumbaz is the major architectural attraction of the structure. The structure also comprises a mosque and a mysterious whispering gallery, where even the whisperings can be heard clearly to a distance of more than 30 meters. This tourist attraction is presently under the protection of government.

Ibrahim Rauza is a popular structure in the Bijapur city. Ibrahim Rauza commonly known as the most popular tourist location in Bijapur after Gol Gumbaz. It is the tomb of the Adil Shahi ruler Ibrahim Adil Shah II, who ruled the Bijapur city from AD 1580 to AD 1627. This structure is built on a single rock bed. The symmetric features given to the Ibrahim Rauza is an important attraction of this structure. The location can be included in the list of must see places in Bijapur.

The Rock Hill Garden is one of the many tourist attractions in Bijapur. The garden is a part of the Alamatti Dam, another tourist destination in Bijapur. This is the most popular garden in Bijapur. The musical fountains and flowers in this garden make it a unique location in the city where human skill and beauty of the nature is combined. An artificial forest area with ceramic statues of wild animals is also developed here as a part of the garden. The Rock Hill Garden can create an ever memorable picture of nature in the mind of a tourist.

The Alamatti Dam, opened in the year of 2005 is one of the newest dams in the Karnataka state and a popular tourist spot in the Bijapur district in Karnataka. The dam built across the Krishna River in north Karnataka has 560 MU annual electric outputs target. The dam also plays the role of the main reservoir for the Upper Krishna irrigation project. The Alamatti Dam offers a scenic view of water and nature to the tourists. The location of the dam and premises has been decorated with gardens and fountains to make it one of the attractive tourist spots in Bijapur. Boating facilities available in Alamatti Dam makes it a more favorable spot of entertainment to the tourists.

The villages in the rural areas of Bijapur have many things to offer to the tourists. These villages are the best options to know the culture and hospitality of the people in Bijapur closely. Gadia, Bhils, Lohar (Rajasthani blacksmiths), Banjara (gypsies) and Kalbeliyas are some of the major communities live in the beautiful green villages of Bijapur. Small houses built with clay, stones and wood is a common sight in Bijapur villages. 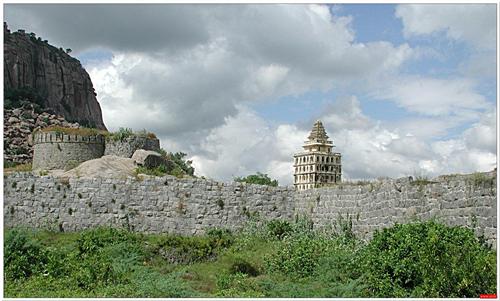 Chand Bawdi is one of the most visited tourist places in Bijapur. It is a water tank built by Ali Adil Shah in the year of 1549 in memory of his wife Chand Bibi. When there was a huge arrival of people into Bijapur after the collapse of Vijayanagar Empire and new settlements came up within the city raised the necessity for better infrastructure and giving water supply. This tank was built with a storage capacity of 20 million liters to provide water to the people.

Later Chandi Bawdi became a model for other tanks built in Bijapur. There is a big compound around Chand Bawdi constructed for the maintenance staff. At the same time, this complex was occasionally used by the member of the royal family for recreation. Chand Bawdi is about 400 feet from the Shahapura gateway of Bijapur city. The stone steps in the Chand Bawdi taper down and the main door of the bigger arch adjoins the wall of this Bawdi. There is large arch that forms the entrance and smaller arches which faces the Bawdi. The four feet pathway parallel to the inner wall of the Bawdi was the model for Taj Bawdi in Bijapur. Considering the historical significance and the architecture structure and value of Chand Bawdi, this tank was declared as being national importance and Chand Bawdi was listed among the protected heritage sites under the archeological survey.