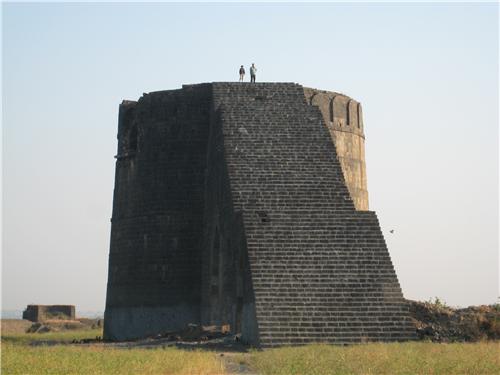 Upli Buruj is one of the protected historical monuments of Bijapur city. The city was built in the 11th century by Chalukya dynasty, one of the prominent dynasties who ruled the Deccan region in the early stages of medieval times. Later by the end of the 15th century Adil Shahis took the control of the city and made Bijapur their administrative capital. The dynasties ruled the city have left many land marks in and around the city of Bijapur. Upli Buruj is such a land mark of Bijapur, contributed by the Adil Shahi dynasty.

This structure was built by Hyder Khan, one of the famous commanders in the Adil Shahi army. The monument is also called in the name of Hyder Buruj by some people in Bijapur. He completed the construction of Upli Buruj by the year of AD 1584. Upli Buruj is a huge tower located within the citadel of ancient Bijapur city. The tower has a height of 80 ft (24 m) and it took few years to finish the construction of the tower. This tower is located north to the Dakhani Idgah in Bijapur city.  The tower has a cylindrical shape with a stair case winding around the main building. From the top of the tower a unique view of the Bijapur city is available and the tourists coming to Bijapur city show a common interest to enjoy the view of the city and famous historical monuments from the top of the Upli Buruj tower built by Adil Shahis. It will be a memorable experience to watch Bijapur from the top of the watchtower used by the soldiers of ancient Bijapur city.

The main intention behind the construction of Upli Buruj was strengthening the security of Bijapur city. After the construction of the structure Adil Shahis used Upli Buruj as a watchtower to watch the sights outside the fort wall and to detect the presence and movements of enemies. The tower was built close to the western sides of the citadel. For the defence purpose of the Bijapur city two cannons were implemented at the top of the Upli Buruj tower. The tower can be considered as one of the wise movements by the Adil Shahis to accommodate a strong defense system in the Bijapur city. The tower served the city for resisting enemies in the medieval times and presently standing as an important land mark of Bijapur city and attracting hundreds of tourists to the city.